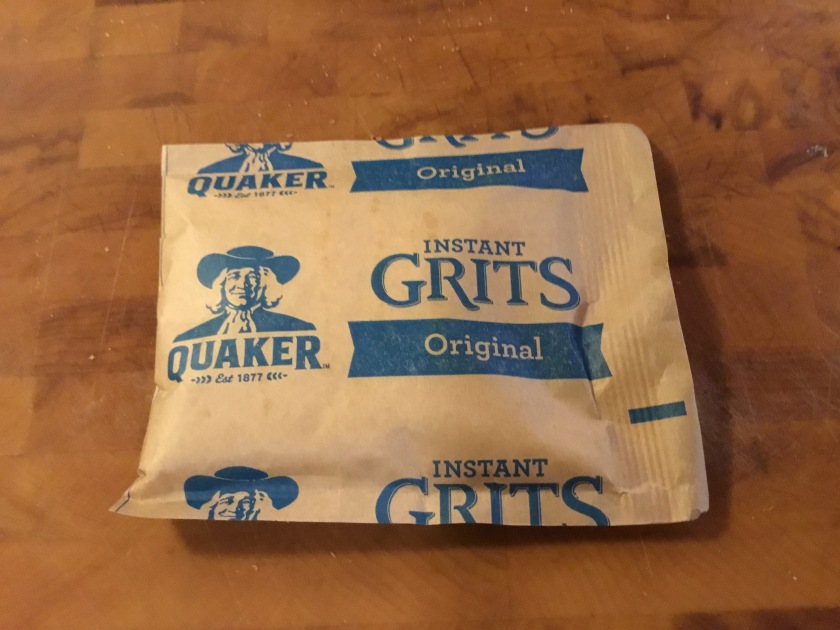 My alcoholic writing Professor at the University of Alabama would often repeat the following: “College is like a grit factory. You all come in looking different, and then you all leave looking exactly the same: bland and lily white.” There is some truth to that, as my Alma Mater has now devolved into a country club with a football team. But that’s a subject for a different kind of blog.

The Prof had one thing right: grits back then were pretty horrible. Multiple James Beard award winning chef Frank Stitt says, “the life had been processed out of them.” There were none worse than those served at UA cafeterias. Mine would be so hard that they needed to be cut with a knife, and were topped with a pat of margarine, that would bleed across the top like a yellow oil slick. If the settlers at Jamestown had been given those, they would have jumped back on the boat, and headed back to England.

But that is where grits came from. It is a certifiable, documentable, dish that came directly from the Native Americans of Virginia. The English in 1607 couldn’t handle the native name “rockahominie,” so the dish became “hominy grits,” a term which a real old school type will still use. Now they are just grits, and we are living in something of a grits renaissance.

Before I get to that, let’s have a quick rundown of modern grits.

These jokers come in a little paper bag for the culinarily impaired. I risk it all with this comment: there is hardly a better backpacking/camping food. It’s inexpensive, goes with anything, conserves fuel and weight, and can be eaten with any meal. Also packs some serious carbs. Also does not have the sodium punch that something like ramen noodles have. With that said, I will not eat these at home.

More flavor than the instant ones, but still highly processed. Cooks in around five minutes.

High speed ground corn that takes a while to cook. Buy a bag of these, throw the grits into the compost, and use the bag for something else.

Here’s the ticket. There are both national and local brands available now, and the quality varies from excellent to superb. I go with the organic ones to make sure there are no weird genes in my grits, as in GMO. Our local brand, McEwen & Sons, is served at everything from breakfast joints to some of the best fine dining restaurants in the country, including the James Beard most Outstanding Restaurant in the US in 2018, Highlands Bar and Grill in Birmingham.

White, but not bland.

This is a basic recipe for a couple of people, to which many things can be added, the most common being grated cheese.

Heat the milk and salt, and add grits gradually. Stir regularly for 25-30 minutes, until the grits soften and gain a smooth texture. DO NOT LET THIS BURN, or you may be buying a new pan. Add more liquid as needed. When done, add the butter or other fat (apparently the natives of Virginia used bear fat), and pepper if desired. Serve hot.

Uses for leftovers are manifold, one of the most common being “Grit Cakes.” If you really get addicted, buy the book Glorious Grits, which was written by Susan McEwen McIntosh.

Writer, Woodworker, and Happy Eater View all posts by southernfusionfood

This site uses Akismet to reduce spam. Learn how your comment data is processed.

because facts really should be sacred

Or not, depending on my mood

A Haven for Book Lovers

because I've got to tell someone.

a little lunch, a little wine, a LOT of talking!

Citizen Sketcher
This, That, and the Other

Tales of quilting, gardening and cooking from the Kingdom of Chiconia

Refuge of an assumed danophile...

this is... The Neighborhood

the Story within the Story

Beauty lies within yourself

The only impossible journey in life is you never begin!! ~Tanvir Kaur

A daily selection of the best content published on WordPress, collected for you by humans who love to read.

The best longform stories on the web